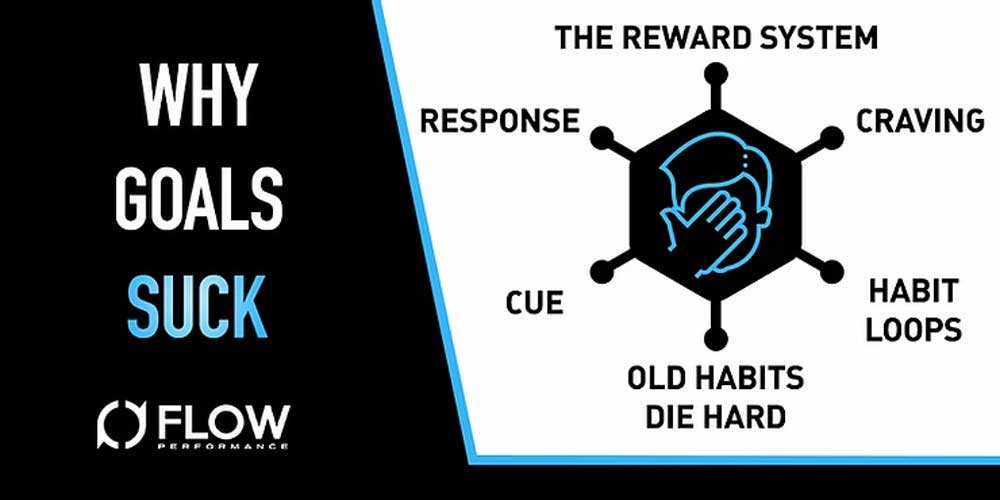 Alright, I want to preface this by saying that goals don’t actually suck…

What really sucks, is the process of breaking your old bad habits and creating new ones.

The reason that breaking old habits & creating new habits can be quite a daunting task isn’t really your fault. To better understand why we do the things we need to understand that humans are VERY simple creatures.

Human behaviours are governed by 2 main objectives, necessity (food, sleep & avoidance of pain) and rewards (any object, event, or activity that motivates us, causes us to learn, or elicits pleasurable feelings)

When we expect a reward a hormone known as dopamine is released. Dopamine is known as the feel good neurotransmitter & the brain releases it when we eat foods that we crave or while we have sex, contributing to feelings of pleasure and satisfaction.

These feelings of pleasure and satisfaction originate from a group of neural structures responsible for incentive salience or in layman’s terms the desire/craving for a reward.

According to a 2009 study published in the European Journal of social psychology it takes between 18 and 254 days for a person to form a new habit. That same study also concluded that it takes around 66 days for a new behaviour to become automatic.

This means that at a minimum we need to be spending 3 weeks consciously practicing to form a new habit and at the upper end of things we need to be looking at around 9 months to break old habits & form new ones.

Across this up to 9 month period of change, habits follow a very distinct pattern. A cue, a craving, a response & a reward. This is better known as a “Habit Loop”.

Over time, with reinforcement & practice, these habits will become automatic & will ultimately help you to achieve your goals.

I want to dive further into this habit loop & it’s four elements to give you a better understanding of the underlying mechanics of habits and how you can add them to your toolbox & implement them into your life.

A cue is a piece of information that predicts a reward. Throwing back to our ancestors, a cue is something that signals the location of a primary reward (or necessity) like food, water or sex. In todays society we spend the majority of our time looking for cues that predict secondary rewards. These are things that give us the same sense of satisfaction or pleasure but have no real survival benefits.

In the information age we live in, many of these cues are targeted directly at us with the intention of having us engage at a higher level. Things like social media, online shopping & click bait articles are all designed to cue us for a reward & naturally lead us to a craving.

Cravings are the motivational force being every habit. Without a craving we have no reason to act. The important thing to note here is that we don’t actually crave a habit, but rather we crave the change in state that occurs after taking part in said habit.

You do not crave a cigarette, you crave the feeling of relief it provides once the nicotine hits your bloodstream.

You aren’t motivated by a burger & chips, you are motivated by the feeling of satisfaction your body provides once you consume a high calorie meal.

Every craving is linked to a desire to change your internal state. The thoughts, feelings & emotions you feel are about that innocuous little cue are what turn it into a full blown craving.

The third step is the response. The response is the actual habit you perform after giving in to that craving. Whether a response occurs depends on how motivated you are and how much friction/frustration is associated with the behavior. If a particular action requires more physical or mental effort than you are willing to expend, then you won’t do it.

Your response also depends on your ability/circumstance. It might sound simple, but a habit can occur only if you are capable of doing it.

If you want to smoke a cigarette but you don’t have any cigarettes, then you have two options.

This in itself is a VERY powerful tool when it comes to forming or breaking a habit.

If you are trying to quit smoking, not having cigarettes around will make it MUCH harder to smoke a cigarette.

Inversely, if you are trying to drink more water & you ALWAYS have a water bottle with you, you will be MUCH more likely to hit your water targets on a regular basis.

The last stage of the Feedback Loop is the reward. We are motivated by a reward because it provides us with the satisfaction of a craving and/or they teach us something. Although ultimately the reward might help us to survive, the immediate feeling of pleasure comes from the satisfaction of your craving. By eating, getting likes/follows & the winning approval of your peers the reward delivers pleasure, satisfaction & relief from the craving in real-time.

Secondly, rewards teach us which actions are worth remembering in the future. Your brain is a reward detector. As you go about your life, your sensory nervous system is continuously monitoring which actions satisfy your desires and deliver pleasure. Feelings of pleasure and disappointment are part of the feedback mechanism that helps your brain distinguish useful actions from useless ones.

Rewards close the feedback loop and complete the habit cycle.

If a behavior is insufficient in any of the four stages of a habit loop it will not become a habit. Eliminate the cue and your habit will never start. Reduce the craving and you won’t experience enough motivation to act. Make the behavior difficult and you won’t be able to do it. And if the reward fails to satisfy your desire, then you’ll have no reason to do it again in the future.

Without the first three steps, a behavior will not occur.

Without all four steps, a behavior will not be repeated.

Without repetition a habit will not be formed.

Knowing that a habit takes between 18 & 254 days to be formed or broken, and understanding that humans are simple creatures that can be greatly affected by our hormones & our rewards systems. We can make a plan of attack that either increases or decreases your likelihood of completing a feedback loop & ultimately implementing a habit.

“We are what we repeatedly do. Excellence, then is not an act but a habit” – Will Durant

Aerobic Fitness: The Base to Performance and Health