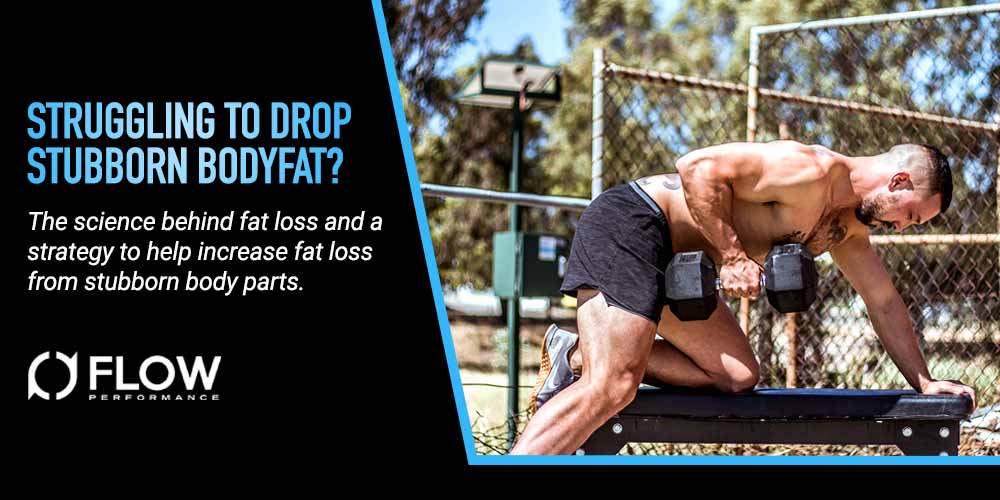 The science behind fat loss and a strategy to help increase fat loss from stubborn body parts.

Although losing weight and body fat is ultimately determined by caloric balance and energy output, losing weight off certain regions of the body can be harder for some people than others. Unfortunately, it’s common to struggle to lose body fat in specific regions like the lower back, hips & abdominals. This often has to do with our genetics, hormones and body fat percentage.

Spot reduction is a term marketed within the fitness industry and unfortunately misleads many into purchasing crazy supplements and training devices all with the promise of them losing that last bit of stubborn body fat. These malpractices are rampant and we’re here to shed some light on how spot reduction actually works and what you can do to rid yourself of those stubborn hot spots.

How does fat burning actually occur?

Firstly, when energy expenditure outweighs energy consumption we enter into a calorie deficit and the fat burning process begins.

Fat burning is a 3 step process:

Lipolysis is the first step in burning body fat, it refers to mobilising fat from the cell and moving it into the bloodstream. Mobilization is controlled by the fight and flight response, more specifically epinephrine and norepinephrine. When these catecholamines are released a chain reaction occurs triggering the release of hormone-sensitive lipase (HSL) an enzyme that hydrolyses triglycerides and breaks them down into free fatty acids. Once broken down into free fatty acids these can now be transferred into the bloodstream and transported to the area of use for fuel.

This is one possible explanation for why you drop body fat easier from some body parts and not others.

The next step is for free fatty acids to bind to albumin (a transport protein), which then allows them to move through the blood to the area of use. Once they arrive at their area of use, these free fatty acids are transported into the mitochondria so they can be broken down and converted into adenosine triphosphate (ATP) and used as fuel.

It’s really important to understand that none of this occurs without a calorie deficit. A calorie deficit is the first step in the process. When the body registers the lack of fuel, epinephrine and norepinephrine are released which cause the mobilization of fat.

Once catecholamines are released into the bloodstream they bind to adrenoceptors where they begin to exert their effects on their target receptor. These receptors come in two primary forms, alpha and beta receptors. Beta receptors are most commonly stimulatory in nature and alpha are often inhibitory.

Beta-2 & 3 receptors when stimulated cause lipolysis (the breakdown of fat).

Alpha-2 receptors are antilipolytic in nature and when stimulated prevent fat break down from occurring.

This is where stubborn body fat sites come into play. Some sites such as females hips, thighs and males abdominal region often have higher densities of alpha-2 receptors which makes them more resistant to lipolysis. This provides another reason for why some regions of the body are often harder to lose body fat from.

What can we do to lose the fat from these areas?

Something worth understanding is that the body will always take fat from the path of least resistance.

Meaning that if the body can get fat from a source easier… it probably will. This, unfortunately, means that often these stubborn sites are the last place for your body to liberate fat from.

When trying to target these sites research has shown that the higher the adrenergic stimulus the more likely we are to start mobilising and utilising the stubborn body fat. Exercise with intensities greater than 70% VO2max has been shown to increase the adrenergic stimulus and increase the likelihood of overcoming the resistance of alpha-2 receptors. This allows us to mobilise the stubborn fat.

Once mobilised, it’s important to understand that if it’s not oxidised it will be restored into the fat cells.

One of the protocols we use to burn stubborn body fat is to combine the use of high-intensity intervals followed by low-intensity steady state work. The high-intensity intervals work (above 70% VO2max) on stimulating a high adrenergic stimulus and mobilising free fatty acids, then low-intensity steady-state work ensures we oxidise the mobilised fuel. We’ve found that this protocol can be effective for people at the end of their cut who are struggling to burn that last little bit of fat.

At the end of the day, fat is your insurance policy against famine and your body will do everything possible to keep it to protect you from that rainy day (dam you body). It’s important to understand that burning this stubborn fat isn’t an easy process and it’s a protective mechanism to ensure your survival from a famine. The leaner you get, the harder it gets to lose fat and these stubborn body parts are often the last place you’ll lose body fat from. Stick with the process and eventually, those sites will reduce.

Aerobic Fitness: The Base to Performance and Health